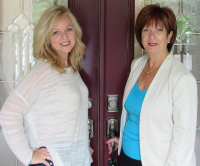 Home sales recorded over Canadian MLS® Systems edged up a further 0.9% between August and September, raising them to yet another new all-time monthly record. (Chart A)

The small change from August to September had under its surface a mixed bag of results with about 60% of local markets seeing gains. Increases in Ottawa, Greater Vancouver, Vancouver Island, Calgary and Hamilton-Burlington sales were mostly offset by declines in the Greater Toronto Area (GTA) and Montreal; although, activity in the two largest Canadian markets is still historically very strong.

Actual (not seasonally adjusted) sales activity posted a 45.6% y-o-y gain in September. It was a new record for the month of September by a margin of some 20,000 transactions, the equivalent of a

normal month of September with an entire month of December tacked on. Sales activity was up in almost all Canadian housing markets compared to September 2019. 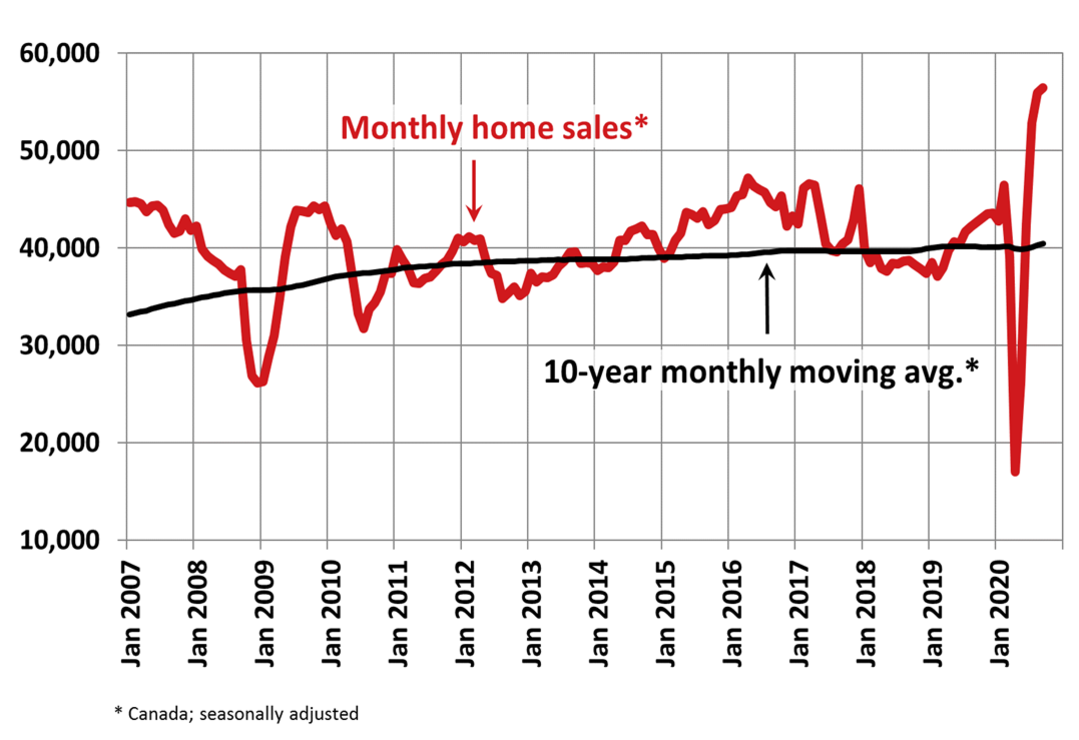 “Many Canadian housing markets are continuing to see historically strong levels of activity as we enter into the fall market of this very strange year,” stated Costa Poulopoulos, Chair of CREA. "Along with historic supply shortages in a number of regions, fierce competition among buyers has been putting upward pressure on home prices. Much of that was pent-up demand from the spring that came forward as our economies opened back up over the summer. With second wave worries growing, we will remain vigilant in adhering to government and health officials’ directives to keep our clients safe. Now as always, REALTORS® remain the best source for information and guidance when negotiating the sale or purchase of a home,” continued Poulopoulos.

“This is starting to sound like a broken record (about records being broken), but Canadian home sales and prices set records once again in September amid record-tight overall market conditions, as they did in July and August,” said Shaun Cathcart, CREA’s Senior Economist. “Reasons have been cited for this – pent-up demand from the lockdowns, Government support to date, ultra-low interest rates, and the composition of job losses to name a few. I would also remind everyone that sales were almost setting records and markets were almost this tight back in February so we were already close to where things are now, as far away from Goldilocks territory as we had ever been before,” added Cathcart. “But I think

another wildcard factor to consider, which has no historical precedent, is the value of one’s home during this time. Home has been our workplace, our kids’ schools, the gym, the park and more. Personal space is more important than ever.”

The number of newly listed homes fell back by 10.2% in September, reversing the surge to record levels seen in August. New supply was down in two-thirds of local markets, led by declines in and around Vancouver and the GTA.

With sales edging up in September and new supply dropping back, the national sales-to-new listings ratio tightened to 77.2% – the highest in almost 20 years and the third-highest monthly level on record for the measure.

Based on a comparison of sales-to-new listings ratio with long-term averages, about a third of all local markets were in balanced market territory, measured as being within one standard deviation of their long-term average. The other two-thirds of markets were above long-term norms, in many cases well above.

The number of months of inventory is another important measure of the balance between sales and the supply of listings. It represents how long it would take to liquidate current inventories at the current rate of sales activity.

There were just 2.6 months of inventory on a national basis at the end of September 2020 – the lowest reading on record for this measure. At the local market level, a number of Ontario markets are now into weeks of inventory rather than months. Much of the province of Ontario is close to or under

one month of inventory.

Of the 39 markets now tracked by the index, all but two were up between August and September.

The non-seasonally adjusted Aggregate Composite MLS® HPI was up 10.3% on a y-o-y basis in September – the biggest gain since August 2017. (Chart B) 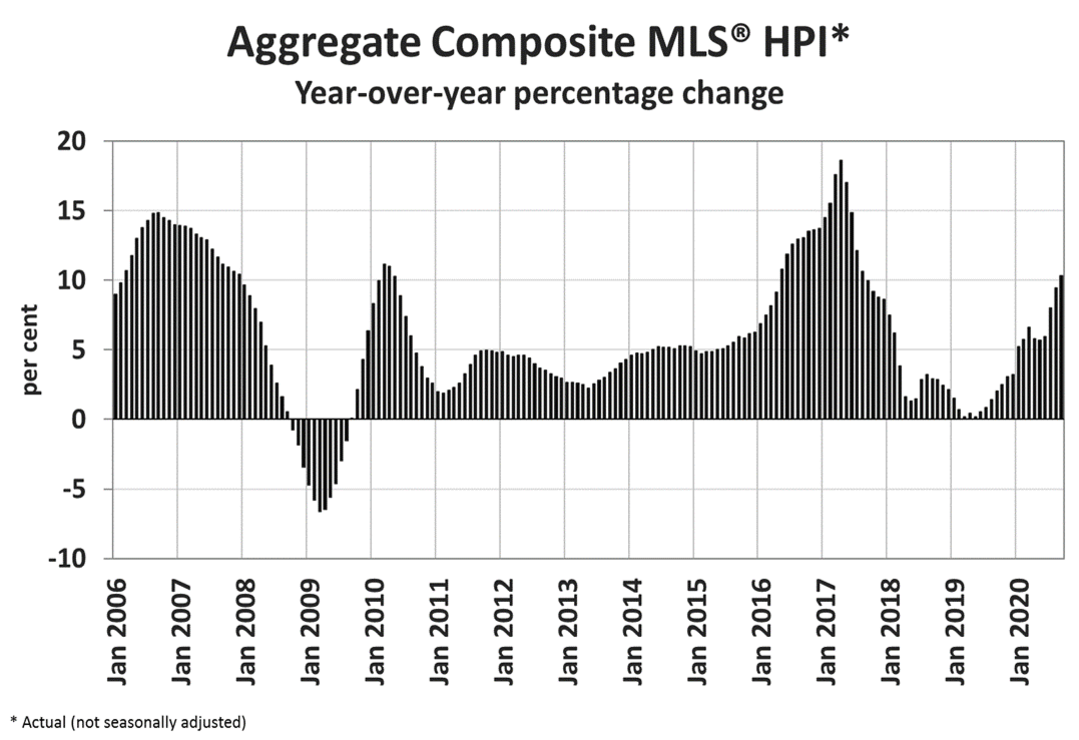 The largest y-o-y gains in the 22-23% range were recorded in Bancroft and Area, Quinte & District, Ottawa and Woodstock-Ingersoll.

Prices were up in the 10-15% range compared to last September in the GTA, Oakville-Milton, Kawartha Lakes, Kitchener-Waterloo, Mississauga, Northumberland Hills, Peterborough and the Kawarthas, and Greater Moncton.

Meanwhile, y-o-y price gains were around 5% in Greater Vancouver, the Fraser Valley, the Okanagan Valley, Regina, Saskatoon and Quebec City. Gains were about half that in Victoria and elsewhere on Vancouver Island, as well and in St. John’s, and prices were more or less flat y-o-y in Calgary and Edmonton.

changes in the mix of sales activity from one month to the next.